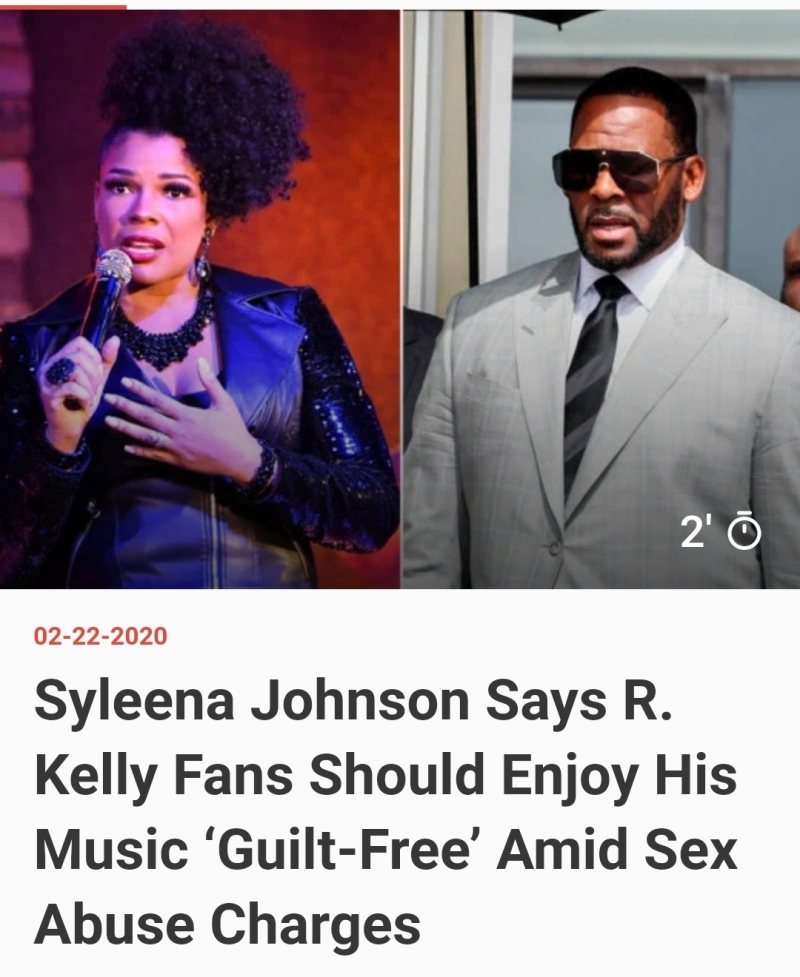 The link to the above EUR article can be found here. The original Page Six article is here.

Syleena Johnson is a singer and has even worked with R Kelly on a few songs, early in his career, so she financially benefits from airplay of those songs on radio, the Internet, and through DJs spins. She can convince herself that listening to his music is okay and can be done so guilt-free, because she obviously struggles with her internal monitor that questions why she didn’t know she worked with a predator. And she probably thinks that since, “it didn’t happen to me” and “he never was inappropriate with me”, that somehow it diminishes or dabbles away the offenses he has committed for decades.

You can acknowledge a person’s creative genius while also acknowledging the wrong they’ve done. To say we should ignore the latter because the contributions a person makes is helpful or makes us feel good, is plain ignorance.

This predator wrote and sang about his offenses and crimes. He won awards for songs about seducing, manipulating, abusing, enslaving, and victimizing girls and young women. He’s been raking in millions of dollars through royalties earned on album sales and air time on radio.

Why would you continue to support him just because his music made you rock your shoulders or tap your feet?

I can’t listen to Bump n Grind, 12 Play, Trapped in the Closet, and so many other songs without thinking about the girls and women he took advantage of.

When I saw this article posted on Instagram the words I wrote below in the MuteRKelly IG thread, summarizes what I think of the mindset of Syleena and other R Kelly fans and supporters:

This right here…uugh 🤦🏽‍♀️When we knowingly aid the victimization of those we obviously don’t value, respect, and believe should be protected—we then are no better than the victimizer.

Clearly, the slave mentality sees no color of the master, it just wants to maintain the status quo. Because I can guarantee you there would be Black rage 🤬 across the board if the accused was a white man abusing young girls and women.

We would be picketing with signs that “Black women matter” and “Black girls matter” and the media would flood our airwaves and timelines with images and videos of protests.

But, unfortunately, this savagery by R. Kelly is deemed acceptable because he is also Black, like his victims. If the girls and women were white, oh my white America would be singing a lynching battle cry.

But, be calm America, it’s just Black on Black victimization.

No worries. Don’t fret. Because Black on Black crime is supposed to be the norm?!? Status quo?!?

Oh this sickness permeates so wide and deep. How will we uproot it, pluck it out, and flush it into nothingness? 😫

These are my words and thoughts. I stand by them. I won’t financially or socially support a person, brand, or ideology that victimizes, preys upon, enslaves, abuses, brainwashes, manipulates, rapes, molests, and benefits from the tearing down of one person for the gain of another.

And yes, Syleena, this means I won’t spend a penny that benefits Weinstein or Cosby. Predators don’t get financial passes just because they’re entertaining or inspirational.

#MuteRKelly and all predators!